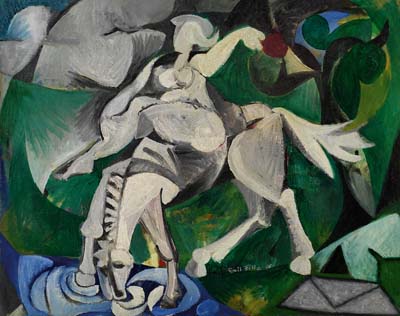 Kubistische Komposition (Die Reiterin)
Oil on canvas, 1948 .
Signed and dated lower center. 40 : 50 cm (15,7 : 19,6 in). The beginnings of modern Czech art are indissolubly linked with Emil Filla, who played a paramount role in making Prague a centre of Cubism second only to Paris. Throughout his career Filla was preoccupied with problems of perception and translating them in visual terms. In so doing, he remained true to Cubism in all the work he did. His 1947 genre-like painting of a horse drinking water and a female nude in an idyllic rural setting reveals a pictorial conception that is close to Cubism in the dissolution of form in the visible objective world into Cubist elements and the fusion of animal, human being and surrounding picture space. The animal paintings Filla did before the second world war are dominated by horrendous battles between man and animal and some of them can be interpreted as political allegories representing the artist’s personal position on contemporary events. In 1933 Filla’s work was outlawed as ‘degenerate art’. The artist was arrested by the Gestapo when war broke out and deported to Dachau and then Buchenwald. A representation of a peaceful scene, the present work from the postwar era expresses a pervasive mood of pacification, exemplifying the late style of one of the most important avant-garde Moderns. [SuS]
EXPERTISE: This work is accompanied by a certificate of authenticity signed by Dr. Jan Dvorak and dated 18th February 2005
PROVENIENZ: Galerie Schwerner (with a label on the reverse).