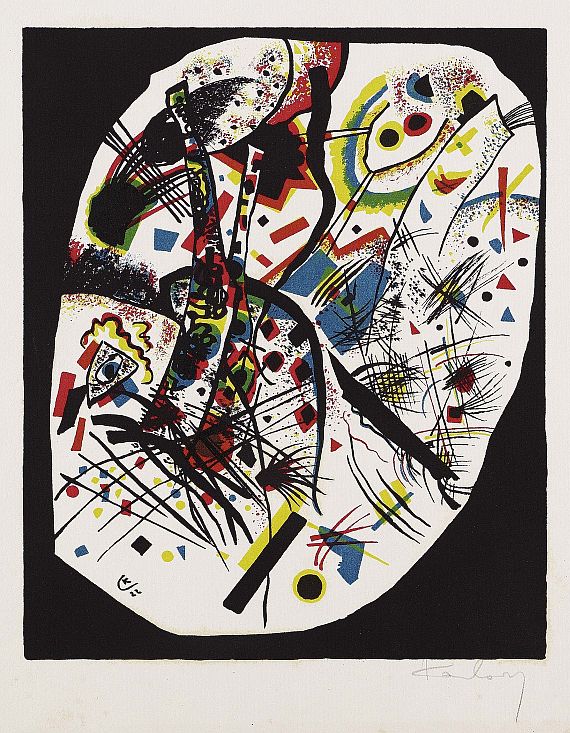 Kleine Welten III. 1922.
Lithograph in colours.
Roethel 166. Signed. Signed with the monogram and dated on the stone. One of 230 copies. On laid paper. 27,8 : 23 cm (10,9 : 9 in). Sheet: 35,5 x 28 cm (14 x 11 in). Kandinsky returned to Germany at the end of 1921 and was offered a teaching position at the Staatliches Bauhaus in Weimar by Walter Gropius. Before he took office in autumn 1922, he produced the graphic portfolio 'Kleine Welten'. His work adopts more and more geometrical-abstract traits at that time and concentrates in the choice of colours on three primary colours. The 'Kleine Welten' are an important testimonial of this transitional period in Kandinsky's work, which continously spurs on his art and helps him to develop a complex abstract style.
In May 1932 Kandinsky wrote to the collector Galka Scheyer, who had been representing him and his fellow painters Klee, Feininger and Jawlensky under the collective name ‘Die Blaue Vier’ in the United States since 1924: ‘I have made all the slabs and stones with my own hands; all prints were drawn under my continuous supervision – some in the Bauhaus (etchings, black woodcut), others at an excellent printmaker’s in Weimar (lithos, the colours in the woodcuts). The bookbinder was the celebrated Professor Dorfner in Weimar. So: first-class execution throughout.’ (quoted from: Roethel, p. 452).

Plate 3, from 'Kleine Welten'. In original passe-partout. Remains of the register mark in the left margin. A horizontal mark from the blue stone in the lower margin
In very good contition. [KD]